An idyllic mountain knowles in the Cadarache forest, in the south of France. Wild boars and mouflons wandering among the oak trees and the pines. The air is full of the aroma of calamint, lavender and wild thym. From far away the chants of the cicada are pleasing to the ear.

Here, 40 kilometers from Aix-en-Provence, at the confluence of Verdon and Durance rivers, 35 nations representing more than half the world’s population have joined forces the biggest scientific collaboration on the planet. 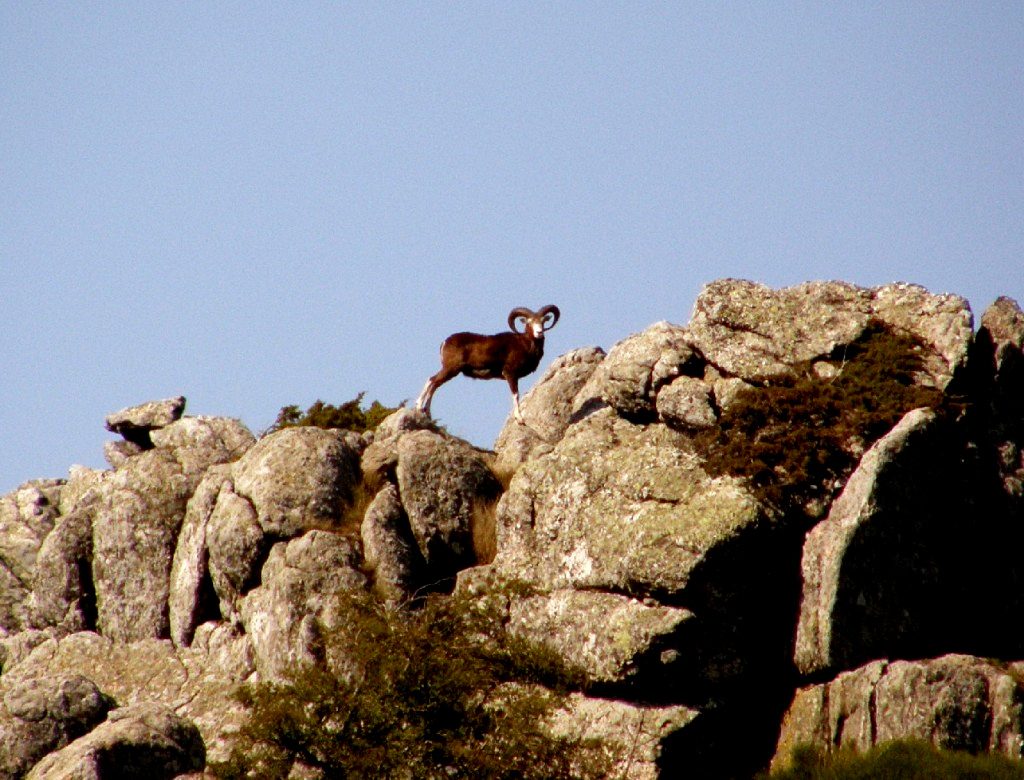 This collaboration, which is known as Iter (International Thermonuclear Experimental Reactor) – meaning “the way” in Latin – is designed to demonstrate a new kind of nuclear reactor capable of producing unlimited supplies of cheap, clean, safe and sustainable electricity from atomic fusion.

The birth of the ITER project
Nearly 30 years ago, a group of industrial nations agreed on a project to develop a new, cleaner, sustainable source of energy that will never run dry. It was in November 1985, at the Geneva Superpower Summit, when President François Mitterrand of France, Prime Minister Margaret Thatcher of the United Kingdom and General Secretary Mikhail Gorbachev (of the former Soviet Union) proposed to U.S. President Ronald Reagan this international project aimed at developing fusion energy for peaceful purposes. 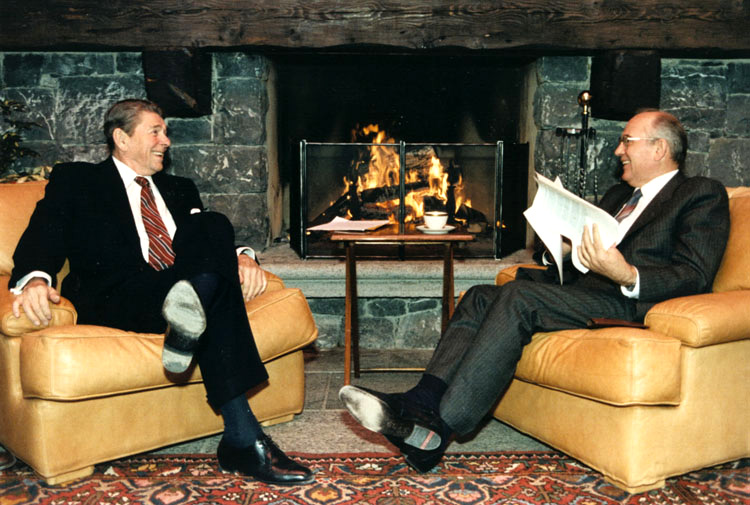 US President and Soviet General Secretary Mikhail Gorbachov at the first Summit in Geneva, Switzerland.

The initial signatories: the former Soviet Union, the USA, the European Union (via EURATOM) and Japan, were joined by the People’s Republic of China and the Republic of Korea in 2003, and by India in 2005. Together, these six nations plus Europe represent over half of the world’s population.

Conceptual design work for the fusion project began in 1988, followed by increasingly detailed engineering design phases until the final design for ITER was approved by the Members in 2001. Further negotiations established the Joint Implementation Agreement to detail the construction, exploitation and decommissioning phases, as well as the financing, organization and staffing of the ITER Organization.

Each Member has set up a domestic agency, employing staff to manage procurements for its in-kind contributions. The ITER Members have agreed to share every aspect of the project: science, procurements, finance, staffing … with the aim that in the long run, each Member will have the know-how to produce its own fusion energy plant.

Selecting a location for ITER was a long process that was finally concluded in 2005. In Moscow, on June 28, high representatives of the ITER Members unanimously agreed on the site proposed by the European Union—the ITER installation would be built at Cadarache, near Aix-en-Provence in Southern France.

First steps on the Site
The beginning of site preparation work in January 2007 represented an important first milestone in the ten year-long construction process to build the biggest international project. A total of 180 hectares of land in St-Paul-lez-Durance, a commune in the Provence-Alpes-Côte d’Azur Region, that is already home to France’s nuclear research centre, the CEA (Commissariat à l’Energie Atomique). 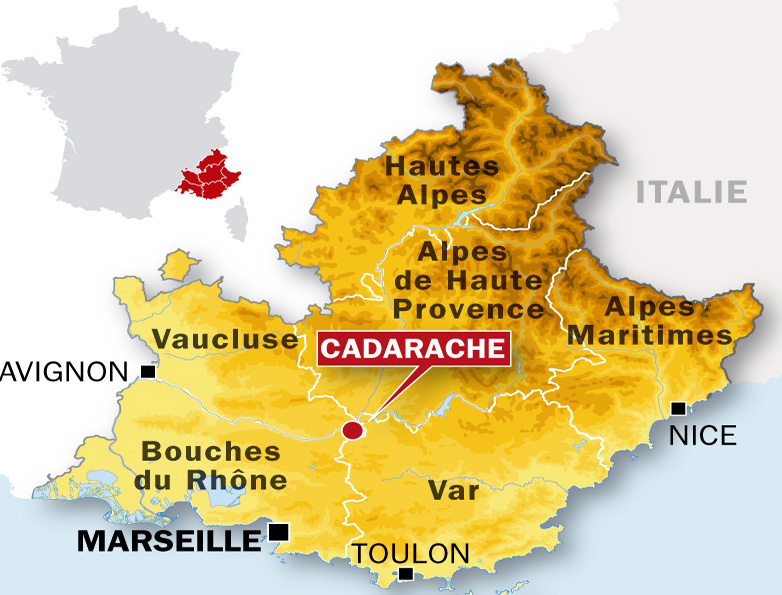 Location of Cadarache (marked in red) in southern France.

Site work was divided into two main phases: the clearing of 90 hectares; and the leveling of a vast platform to house the buildings and facilities of the ITER scientific experiments. Work was carried out under the responsibility of Agence ITER France (an entity of the CEA) for a total of EUR 150 million, financed 40 percent by Fusion for Energy (the European Domestic Agency) and 60 percent by France.

Construction work on ITER
Bulldozers, concrete mixers, and cranes are working from dawn to dusk and 500 architects, ironworkers, tradesmen, labourers, carpenters and electricians designing, constructing and building on the ITER platform – where the construction of the scientific buildings and facilities began in July 2010. Day after day, night after night they completed the 42-hectare platform, which have the size of approximate 60 soccer fields and is the most important feature of the ITER site today. 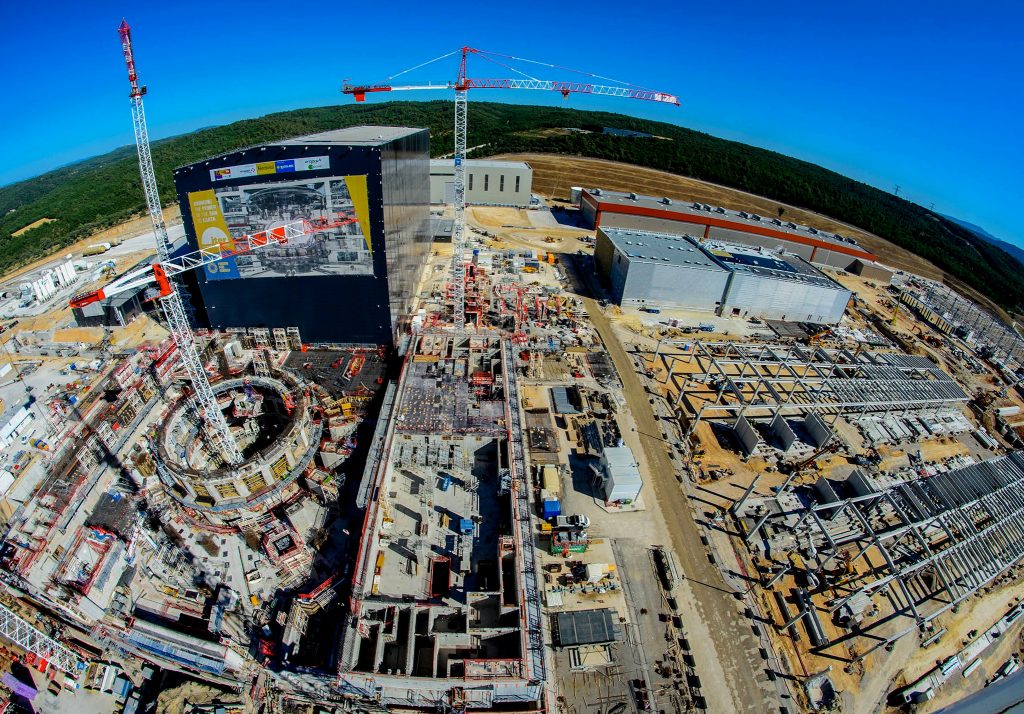 View of the ITER worksite – Iter

More than 39 scientific buildings and dedicated are plannend on the ITER platform and the Tokamak Complex (little remark: the tokamak reactor is 30 metres tall and consists of 18 toroidal magnetic coils weighing hundreds of tons will be among the first buildings which will be completed. The machine will weigh 23,000 tons – that means it will be as heavy as three Eiffel Towers (7,300 tons).

It is expected to come to an end in 2019, while 5.000 workers are on the side. After finishing all the construction work, a commissioning phase will follow that will ensure all systems operate together and prepare the machine for the achievement.

The first plasmas
This phase will be followed by the first plasmas in 2020. First, a several-year “shakedown” period of operation in pure hydrogen is planned during which the machine will remain accessible for repairs and the most promising physics regimes will be tested. of First Plasma in November 2020 to 2022. 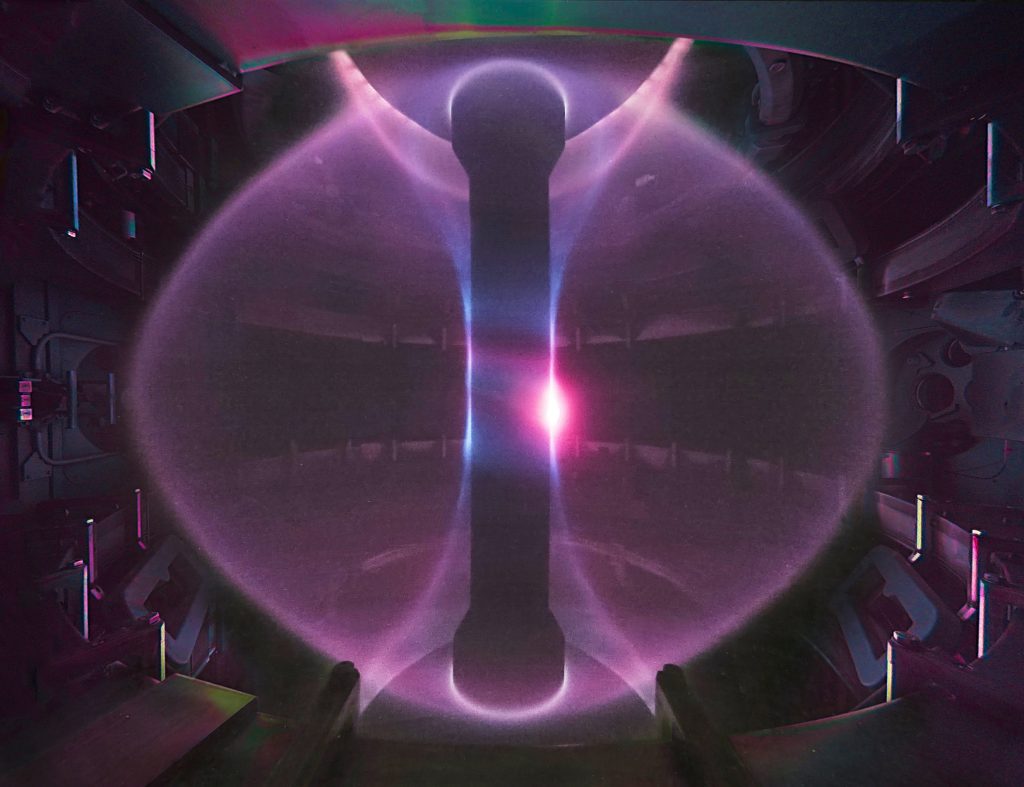 Several experimental tokamak reactors around the world, including one at the Culham Centre for Fusion Energy in Oxfordshire, have shown nuclear fusion is theoretically possible, but the giant tokamak at Iter will be the first to generate more power than it needs to attain the very high temperatures required for nuclear fusion.

The Iter tokamak machine, which is twice the linear size and 10 times the volume of its nearest rival at Culham, will produce temperatures of well over 150 million C – many times hotter than the centre of the Sun.

It is the first experimental fusion reactor to receive a nuclear operating licence because of its power-generating capacity. For every 50 megawatts of electricity it uses, it should generate up to 500mw of power output in the form of heat. But even though Iter has the nuclear licence and will produce about 10 times as much power as it consumes, the Iter machine will still remain an experimental reactor, with no electricity generated for the French national grid. Finally, in 2027 scientists will launch a third phase with increasingly frequent operation with an equal mixture of deuterium and tritium, at full fusion power– and go nuclear, at least in the 2030s.

The Age of Fusion
But ITER is not an end in itself: it is the bridge toward a first plant that will demonstrate the large-scale production of electrical power and tritium fuel self-sufficiency. This is the next step after ITER: the Demonstration Power Plant, or DEMO for short. (conceptual design for such a machine will be completed in 2017). If all goes well, DEMO will lead fusion into its industrial era, beginning operations in the early 2030s, and putting fusion power into the grid as early as 2040.

An aerial view of the ITER construction site in Cadarache, April 2017

By the last quarter of this century, if ITER and DEMO are successful, our world will enter into the Age of Fusion—an age when mankind covers a significant part of its energy needs with an inexhaustible, environmentally benign, and universally available resource.

To summarize the history of the world biggest scientific project (designed to demonstrate a new kind of unlimited supplies of cheap, clean, safe and sustainable electricity): it has been started with a Cold War-era meeting in Geneva, then, nearly 20 years later first site preparation work in Cardache has set the first milestone, after a ten year-long construction process, a tokamak reactor was built, to burn first Plasma in November 2020 to 2022.

If all goes well, ITER will be a bridge to a new area, the Age of Fusion, when mankind covers a significant part of its energy needs with cheap, clean, safe and sustainable electricity from atomic fusion.